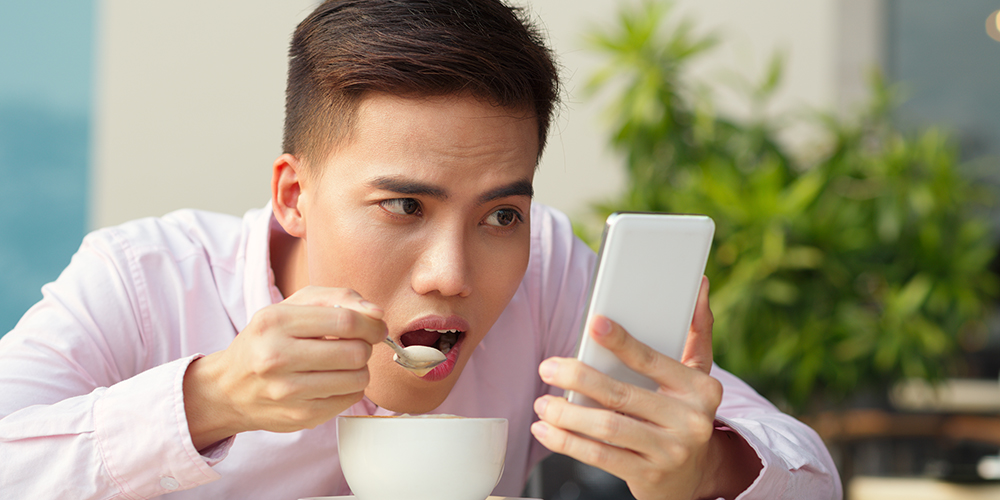 Notice yourself picking up your phone a few times too often every hour? Is your phone distracting you from work or from the person in front of you? You may be suffering with smartphone addiction.

What is a Smartphone Addiction?

Smartphone addiction is a new problem for the digital age. While there isn’t anything addictive about smartphones by themselves, these palm-sized bundles of technology are presenting a growing problem across the globe. Smartphone addiction is basically the overuse and compulsive use of a mobile device, or devices. It is defined by the number of times that users access their device over a short period of time.

Several studies have been carried out determining the relationship between psychological wellbeing and smartphone dependency. This research demonstrates that there is a cause for concern in these areas. Phones are used to talk, text, check email, use dating apps, take photos, set reminders, alarms, write shopping lists, even draw pictures. All this convenience is great for modern lives and people on the go, but what is it doing to our minds?

Cyber addiction is growing and having a device that you carry around with you, where you can access all of your computing, then this isn’t likely to diminish the problem, rather make it worse. The focus is on how it makes people feel when they can’t access their device, then the level of smartphone dependency becomes clear.

What are the Symptoms of a Tech Addiction?

Most people would struggle if their smartphone was taken away. However, is this a symptom of tech addiction?  If you want to know what smartphone addiction is doing to the body and mind, there are some signs you can look out for:

Ask yourself if you have noticed any of the following, in yourself, or someone you know:

If you notice more than three of these in yourself or someone else, then a smartphone addiction is likely.

Symptoms of smartphone addiction can look very similar to substance abuse or gambling problem. It may even be intertwined with one of these. If someone is jeopardizing their education, career, health or relationships because of the time spent on their phone, that is a problem. Becoming defensive about their behavior or lying about it is indicative that something is going on that they can no longer control.

What is Technology Addiction Withdrawal?

People who suffer from cyber addiction are likely to undergo withdrawal similar to people with other addictions. When people choose or have to forcibly give up their smartphone, it can lead to anxiety and increased blood pressure. Other people have noticed their heart rate rise. Some people have said that they feel like they are on a diet, others that they feel isolated or detached. It has even been known to provoke depressive episodes in certain high-dependency individuals.

Withdrawal from smartphones isn’t dangerous, in the way coming off some certain drugs or alcohol can be. However, it can certainly induce poor mental states and be quite upsetting for those who have a serious smartphone dependency.

People will feel irritated, edgy and even upset without access to their smartphone. Depressive feelings are common with those withdrawing from their smartphones. Most people feel quite moody for a few days without their phones.

Physiological symptoms could include sweating, headaches, and nausea in those who have had pathological use of their smartphone. Insomnia has also been reported by those in withdrawal.

One study showed that in people who likely suffered from smartphone addiction, when they weren’t online, they felt a “comedown”, not unlike the one that ecstasy users go through. The same study suggested that for those who have a form of cyber addiction, there could be negative consequences that last the rest of their lives.

When you enjoy something, your reward sensors fire in the brain, releasing dopamine. However, while the first time looking at someone ‘like’ our post on social media may produce dopamine, then the next time we need five likes, then thirty and so on.  For others, it’s the constant need to do something with their hands – they are used to checking social media, reading emails, swiping left and right. All of these habits lead to the brain adapting, the brain seeks pleasure from these actions. It reinforces the association between the action and the feel-good factor that comes after. Addiction causes changes in the brain – you need more and more of the same thing to produce the same effect. So, this affects your mood and the way that you function.

It’s not uncommon for many people to feel mildly anxious if their phone is taken away for a day. What signals withdrawal is if that feeling continues. If someone is spoiling the mood of everyone because they can’t use their phone, this is indicative of a problem.

What Are the Consequences of a Tech Addiction?

There are a number of consequences of smartphone addiction, both short and long-term. In the short-term, it can be things like losing track of time and missing appointments. People may avoid doing work to stay connected or become defensive about their use. Friends may stop hanging out with someone who is more interested in their phone than them.

In the long-term, these can develop into bad habits, which can have terrible effects. If people start missing out on real-life meetings – this can lead to failing classes or losing one’s job. Weight gain is possible if people are staying stagnant for long periods or have given up more active hobbies in order to spend more time using their phones. Vision problems have been detected earlier in those who spend a lot of time staring at screens. Chronic back and neck pain can arise too, from staying in the same position, peering over a screen.

Technology addiction can be bound up with other issues too, so if the person is also shopping, gambling or playing games, there can be money problems that arise. People can lose themselves in other worlds when they are feeling bad about reality, so depression is very common in people who suffer from any kind of addiction, including cyber addiction.

How is Technology Addiction Treated?

Since cyber addiction is a relatively new problem, it is not yet fully recognized as a disorder in the U.S. If the patient has developed the addiction as a result of other issues in his/her life, then it may be possible to receive medication for the other diagnosis.

The first thing to try is removing the smartphone for a day or two. If the person struggles with this, or simply can’t manage it, then it’s time to look at other options.

There are a few digital detox places in the U.S., such as the Center for Internet and Technology Addiction in West Hartford, Connecticut, but it’s likely that more will follow in the future. Many rehab facilities are now accepting patients who suffer from cyber addiction. Tailored treatment within a residential facility is certainly an option for those who can afford the fees.

Cognitive Behavioral Therapy is commonly used in treating smartphone addiction. If you can’t get into a residential center, then you can easily find a treatment provider who can arrange a course of this.

There are no official 12-step recovery groups for those with technology addiction yet, but the philosophy has been proven effective in treatment. Support groups and workshops for addicts and their families can be helpful. Since the problem of tech addiction is growing, it is likely that more meetings and groups will pop up in each state.

The best thing is to talk to your local doctor about the problem. They can recommend what course of action you should pursue and hopefully identify any underlying problems that may be contributing to the addiction.

Smartphone addiction is a very real condition and it’s okay to admit that you need help to overcome it.